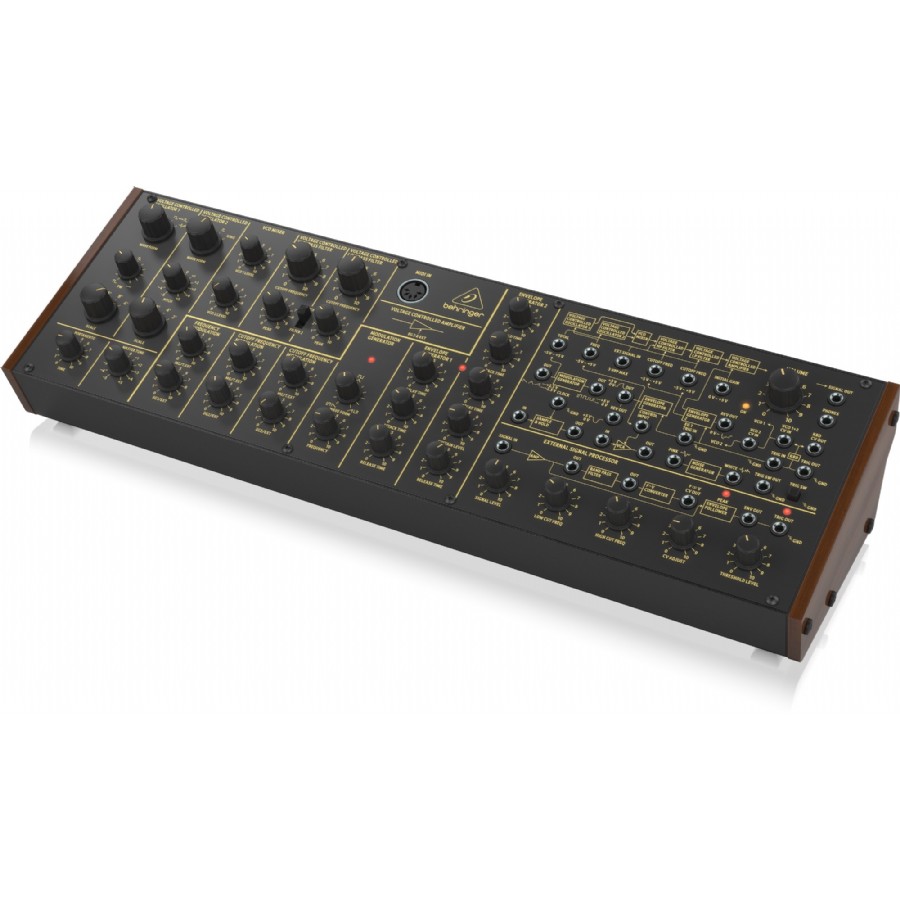 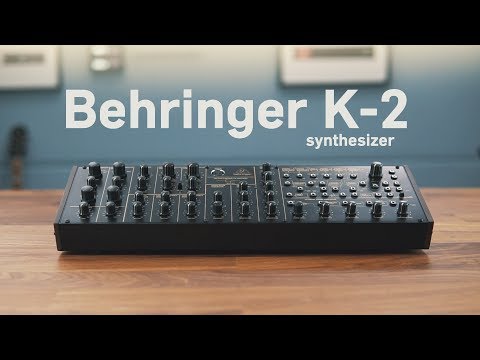 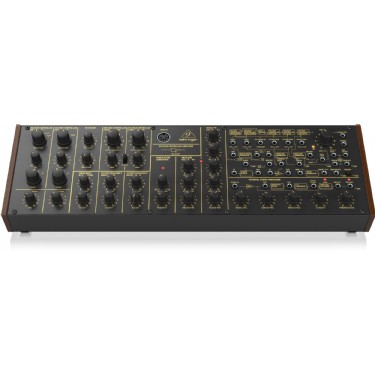 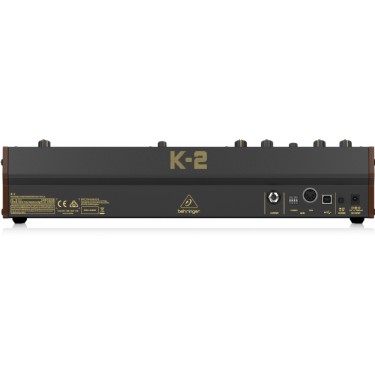 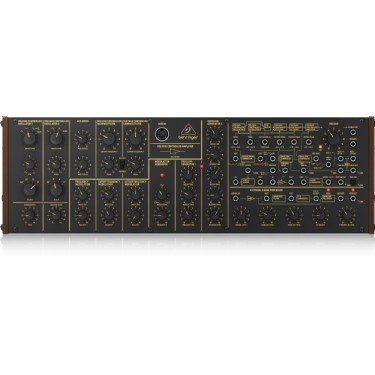 Designed to replace the large, modular synths being used in pop music at the time, Bill Hemsath and Robert Moog developed the Minimoog in 1971. The monophonic instrument became the first truly all-in-one, portable analog synthesizer. Thanks to its 3 oscillators and 24 dB/octave filter, the Minimoog produces an extremely rich and powerful bass sound and is still in high demand today. Yes keyboardist Rick Wakeman said the instrument “absolutely changed the face of music.”

In 1976, Yamaha released their CS-80 8-voice polyphonic synthesizer, which provided velocity-sensitive keys and aftertouch that worked on individual voices. The analog instrument featured a ribbon controller, which allowed the user to perform polyphonic pitch bends and smooth glissandos. Composer Vangelis used the CS-80 extensively in the Blade Runner and Chariots of Fire soundtracks. The CS-80 also provided the bass line heard in the BBC 1980 series Doctor Who theme song.

Although only produced from 1978 to 1983, Korg synthesizers have been favored by numerous world-famous artists including: Aphex Twin; Arcade Fire; the BBC Radiophonic Workshop; Daft Punk; Depeche Mode; A Flock of Seagulls; Gorillaz; Orchestral Manoeuvres in the Dark; Snarky Puppy and a host of others. An ultra-affordable homage to that iconic synthesizer with all the features of the original and then some, the K-2 lets you conjure up virtually any sound with incredible finesse and ease. With its pure analog signal path, dual authentic VCOs with 4 selectable waveforms each, plus extremely flexible VCF and VCA filters, the K-2 is sure to become your favorite keyboard. Owning the K-2 is like having your own personal time machine, enabling you to embrace the past – or make your imprint on the future!

Great care has been taken in engineering the K-2, including the true to the original VCO, VCF and VCA designs and pure analog circuitry with matched transistors and JFETs. This highly-focused attention to detail is what gives K-2 its ultra-flexible sound shaping capability, which covers everything from super-fat bass and lead tones to stunning effects – all the way out to the otherworldly sounds of your imagination.

Sequential Circuits introduced the Prophet 5, which was the first analog 5-voice polyphonic synthesizers to provide onboard memory storage of all patch settings for instant recall. The great-sounding Prophet 5 revolutionized the synthesizer world and, in spite of its rather expensive price tag, became one of the most successful synths of all time. Designed by Dave Smith and J owen, the Prophet 5 was the keyboard of choice by a very long list of performers that includes Peter Gabriel, Philip Glass, Journey, The Cars, Thomas Dolby, Duran Duran, Gary Numan, Pink Floyd, and countless others.

A Passion for Keyboards

Our founder, Uli Behringer has a deep passion for keyboards. Born in the small town of Baden, Switzerland in 1961, Uli grew up in a musical family where his mother taught him to play the piano at the tender age of four. His father was a scientist who built a massive organ in the family home and taught the young lad all about electronics. So at the age of 17, Behringer built his first synthesizer – the UB-1. Later, while attending college to seek a degree in audio engineering, Uli put his electronics knowledge to use, building his own equalizers and signal processors to fill the gap left by the university's inability to provide enough proper studio gear. Word soon spread about how good his products were, and he began building gear for his friends – the Behringer legacy had begun. The rest, as they say, is history...

Rock Right Out of the Box!

Your K-2 comes ready to rock, thanks to its default signal routing that doesn’t require lifting a single patch cable to instantly create amazing sounds. The semi-modular architecture lets you easily tap into the inspired sounds of 1980s and ’90s progressive rock, wave, EDM and synth-pop music synthesizer tracks that made rock and roll history – or to design incredibly fat and original sounds that will make you a legend in your own right!

The very heart of K-2’s sound is its versatile 6 dB High/12 dB Low filter, which lets you freely experiment with the High and Low-Pass Cutoff Frequencies and their respective peak (resonance) settings to dial in the perfect sound. The high-pass filter sets the level of signals below the cutoff frequency, effectively reducing the fundamental and lower-order harmonics levels. The low-pass filter controls the level of signals above the cutoff, which reduces higher-order harmonic content. K-2’s VCF Peak controls provide emphasis to the signals at the crossover frequency.

K-2’s authentic Voltage Controlled Oscillators (VCOs) provides an incredible range of 4 variable oscillator shapes with variable pulse widths and ring modulation for the ultimate in sound creation. VCO 1 waveform choices include triangle, reverse-sawtooth, noise and pulse, where the pulse width can be adjusted from square wave to narrow across a 4-octave range (32', 16', 8', or 4'). VCO 2’s waveform can be selected from reverse-sawtooth, square, narrow pulse and ring, where both oscillators are operating. VCO 2’s pitch can also be varied independently across a 4-octave range (16', 8', 4' and 2'). The VCO Mixer allows you to adjust the levels of VCO 1 and VCO 2 to create an overall mix and a wide range of amazing effects.

While it is a monophonic instrument (one note at a time), K-2’s 16-note Poly Chain function lets you combine multiple synthesizers for up to 16-voice polyphony – plus provides vastly improved reliability and stability over its 1970s and '80s predecessors.

Designed to handle the rigors of life on the road or in the studio, your K-2 can easily be transferred into a standard Eurorack case for the perfect integration into your existing system.

We just can’t help ourselves – like you, we’re gear-heads, too. For those who want the numbers, K-2 has 36 controls, all laid out in a highly-intuitive format that puts the joy back into your music creation. And you can expand K-2’s tone-sculpting capabilities beyond your wildest dreams by utilizing the multi-I/O patchbay to connect external devices at virtually any point in the signal path!

When it comes to not just pushing envelopes but creating them, K-2 gives your imagination its voice – and it’s so very affordable. When modern performance calls for classic analog sound – it calls for the Behringer K-2!

Visit your dealer to experience the stunning K-2 or get yours online today. MUSIC never felt this good!

A Brief History of Analog Synthesis

The modern synthesizer’s evolution began in 1919, when a Russian physicist named Lev Termen (also known as Léon Theremin) invented one of the first electronic musical instruments – the Theremin. It was a simple oscillator that was played by moving the performer’s hand in the vicinity of the instrument’s antenna. An outstanding example of the Theremin’s use can be heard on the Beach Boys iconic smash hit “Good Vibrations”.

In the late 1930s, French musician Georges Jenny invented what he called the Ondioline, a monophonic electronic keyboard capable of generating a wide range of sounds. The keyboard even allowed the player to produce natural-sounding vibrato by depressing a key and using side-to-side finger movements. You can hear the Ondioline on Del Shannon’s “Runaway”.

Finding a high level of acceptance in the 1960s, Harry Chamberlin’s Mellotron was an electro-mechanical keyboard that generated sounds by playing back pre-recorded tape loops. Although tempermental and prone to pitch and mechanical issues, the Mellotron was used extensively by many U.K. artists. Classic tracks from the Moody Blues “Days of Future Passed”, the Beatles “Strawberry Fields Forever”, and the Rolling Stones “She’s a Rainbow” are prime examples.

Manufactured by ARP Instruments, Inc., the Arp 2600 was one of the most successful synthesizers to come out of the 1970s. They were ideal for players new to the synth world, and allowed patches to be changed via switches or 1/8" audio cables. The list of recordings and artists that used the venerable Arp 2600 reads like a veritable Who's Who of rock, pop and jazz, and includes The Who, David Bowie, John Lennon, Depeche Mode, Edgar Winter, Frank Zappa and Herbie Hancock – to name just a few. An Arp 2600 was even used to create the voice of the Star Wars character R2-D2.